Secondary education (1991-97) at Aylesbury Grammar School, including A-levels in Latin, History and English.

For Alaric's publications (and free-access texts thereof) see publications. For details of Alaric's teaching, supervising and examining, present and past, see teaching.

Other Experience and Activities 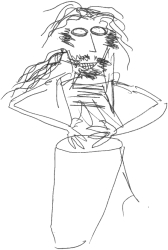 Alaric's favourite non-academic pastime is playing Latin American and African percussion. Back in the good old days he also used to call for ceilidhs. In Helsinki he played with Johnny Badapple, in Glasgow with Unkle Bob, and in Cambridge with the Cambridge University Ceilidh Band (and various peripherally related projects, including a brief but groovy band with Harriet Earis), and the Brazilian Samba group Arco Iris. On and off, Alaric also spends quite a lot of time messing about learning things like Finnish, Swedish, French, Icelandic, Arabic, and Hebrew.